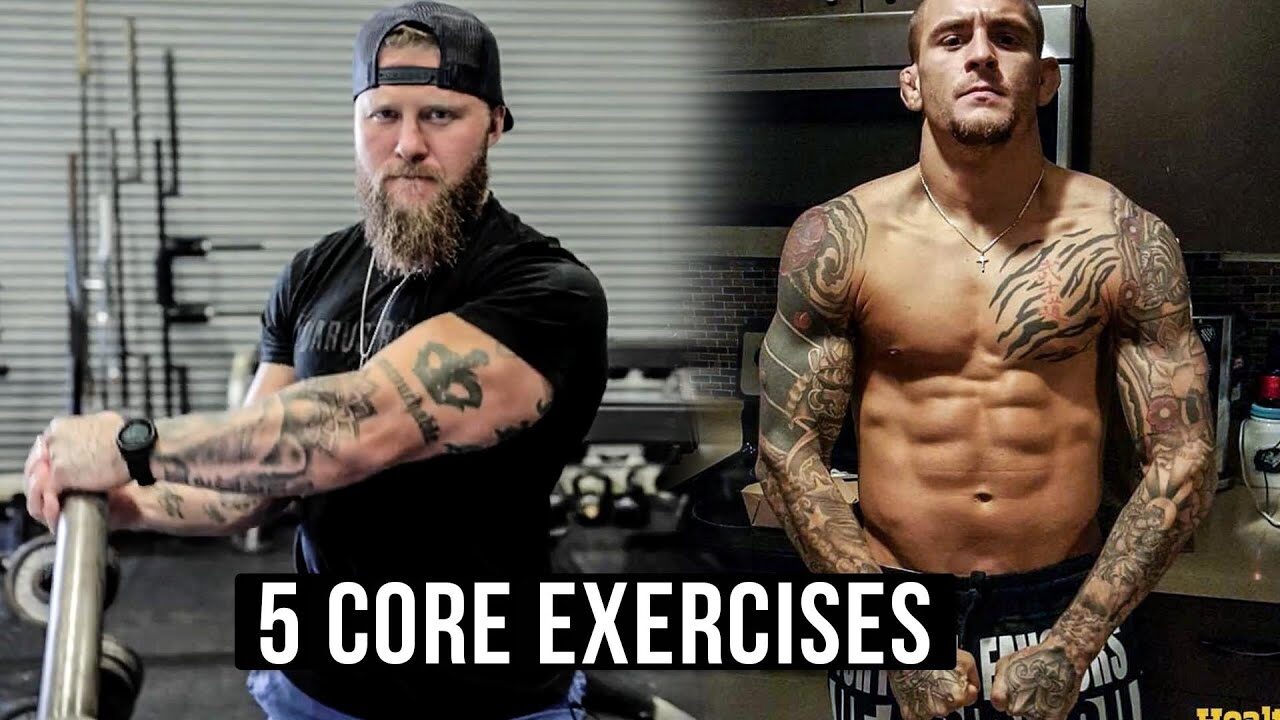 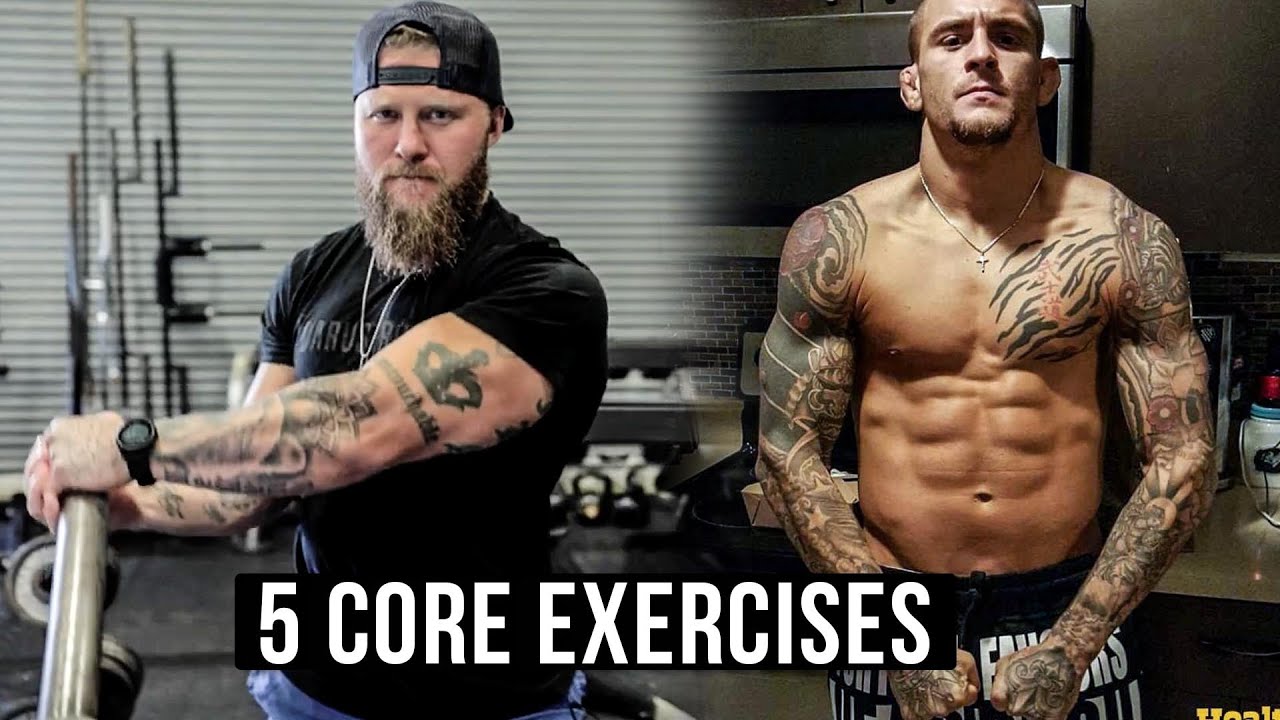 Whether you’re in the fight game, or you just want a bangin’ body, developing your core is crucial.

For fighters, the core serves as your foundation of strength, power, and stability. Every time you throw a punch, throw a kick, go for a takedown, or find yourself in the clinch, high amounts of force are being transferred through your core.

If your core isn’t strong, durable, and sturdy, you will leak force.

And if your goal is having a bangin’ bod, developing a sheet of armor around your midsection isn’t bad on the eyes.

In both cases, many people overlook many areas of the core that are critical to both function and aesthetics.

So today, I want to share 5 core exercises for MMA performance that will allow for complete core development. No weaknesses. No holes. No weak points.

Let’s get into it:

Points of Emphasis for Core Training

Many fighters who select core exercises for MMA training skip out on developing areas of the core that are critical for their performance. Same with people who train for form. But like I said above, whether you’re an athlete or just training for form, complete core development is crucial.

There are six muscle groups that you need to take into account with your core exercises for MMA.

The next muscle groups you need to take into account are the internal and external obliques. These muscles play a role in rotation and anti-rotation (the ability to resist rotation). These muscles have clear implications for fighters as fighters rely on rotational torque to generate power, throw powerful punches, and throw harder kicks.

Then there’s the transverse abdominis. The transverse abdominis is the deepest layer of the abdominals and its main function is stability. As I alluded to above, the core plays a role in nearly every function involved in fighting or any other sport for that matter. In order to maximize the function of the core, it must be stable and sturdy.

The most common core exercise used to stimulate the transverse abdominis is the plank. However, as you begin to master planks, you should find a way to increase the difficulty of your core exercises to continually progress.

But in a second, you’ll uncover some core exercises to develop the serratus anterior and maximize your punching power.

Then there’s the multifidi. These are triangular muscles that run down your spine. These muscles serve to stabilize the spine and can also play a role in anti-flexion. These are critical for maintaining your posture, staying tall, and preventing anyone from jerking you out of your strong positioning.

In order to completely develop the core, all of these muscles need to be equally developed.

Here are a few core exercises for MMA performance that leave none of these stones unturned:

Extension-rotations are an underutilized core exercise that develops the QL, obliques, multifidi, and erectors. In more practical terms, it can support an athlete’s rotational ability, as well as his ability to remain stable under different conditions. As I mentioned above, the muscles of the low and mid back support anti-flexion, or your ability to resist someone or something pulling you into flexion.

This has many practical applications in the fight game as well as other sports. For example, in MMA, anti-flexion can prevent someone from pulling you into their guard.

Here’s How to Perform Extension-Rotations:

The movement mimics a sprint in that as you flex the abdominals, you pop your opposite knee and opposite arm up just like you would during a sprint.

The heavy medicine ball carry is one of my go-to core exercises for MMA guys and athletes in general. Males will want to grab a 100-120 pound medicine ball while females should grab 50 to 60 pounds depending on their strength levels. The ball can also be swapped out with a sandbag if you don’t have access to a heavy medicine ball.

The heavy medicine ball carry brings a storm of benefits.

It mainly develops stabilizers in the back and the transverse abdominis as you try to maintain strong posture with the ball in your arms.

Another thing I like about heavy medball carries is that they’re global movements. That means they work the body in its entirety. This is absolutely critical for all sports, as all sports are full body endeavors.

Here’s How to Perform The Heavy Medicine Ball Carry:

Suitcase carries are another global movement that can bring you a storm of benefits. Mainly, it develop the muscles responsible for anti-rotation, or your ability to resist being twisted or yanked out of position. This will also carry over to your general balance, stability, and positioning in whatever sport you play.

Here’s How to Perform Suitcase Carries:

The last core exercise for MMA performance is the landmine windshield wiper. You don’t necessarily need a landmine for this movement. You can wedge a barbell into the corner of a rack or wedge it into the corner of the wall. However you set it up, make sure it’s stable so you can perform your rotations.

The weight you choose depends on your strength level. Anything up to a 45 pound plate is fine as long as you’re not flexing or extending excessively.

Whatever weight you choose, this movement holds a bunch of benefits. Mainly, this movement will work to build up your obliques, as well as the transverse abdominis (as long as you’re holding proper posture while performing this movement).

Here’s How to Perform The Landmine Windshield Wiper: