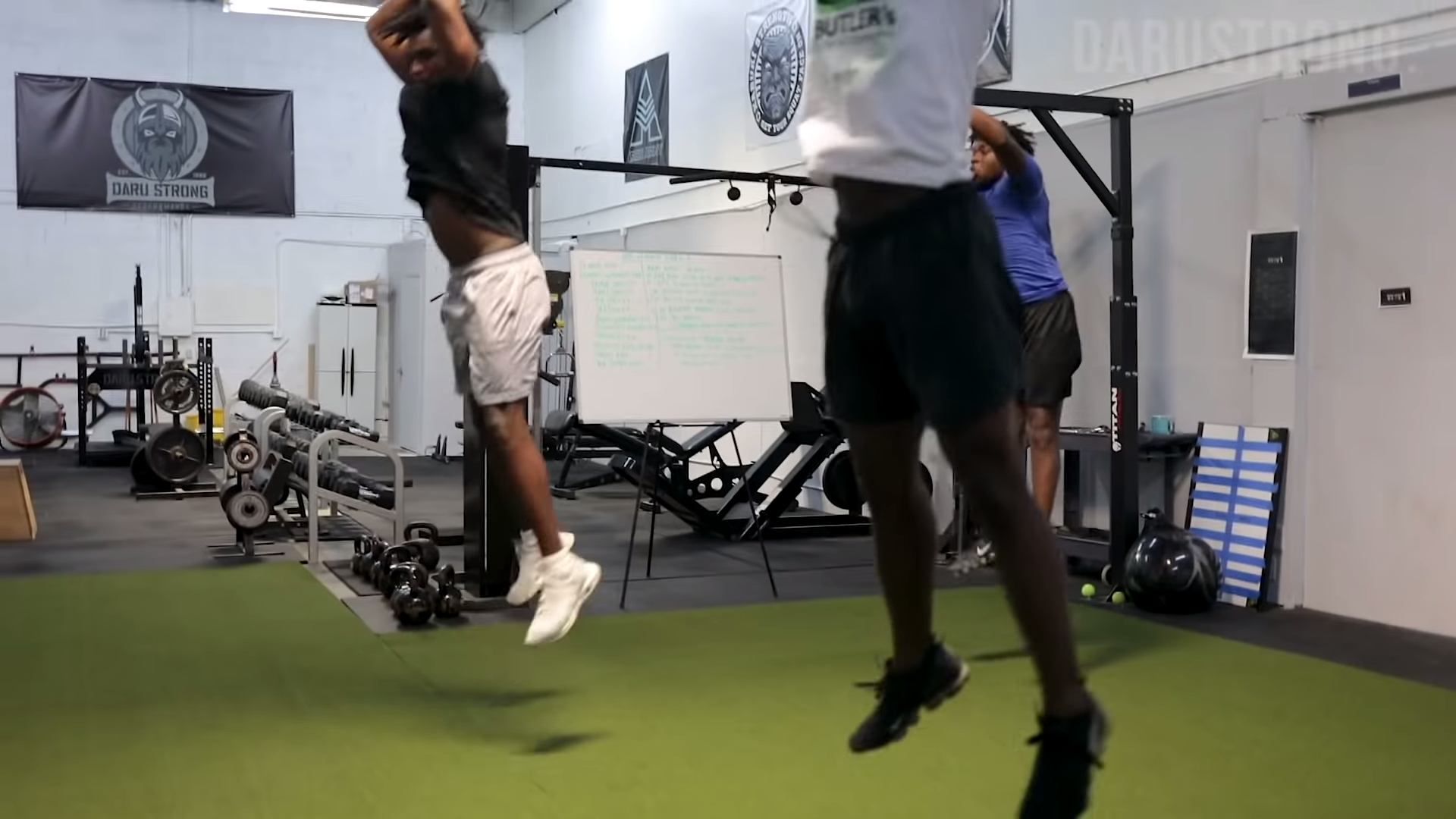 Plyometrics are a misunderstood aspect of training. And I get questions all the time asking, “How do you organize plyometric training for MMA?”

Well, unlike lifting weights, where you just add more weight, do more reps, or add a few sets to progress your training, plyometric training isn’t as clear cut. You can’t just add weights and hope to see progress. There’s a time and place for adding weight.

However, simply adding weight to your plyometrics won’t spark the same results as it does with strength training.

So, how do you organize plyometric training for MMA? And how do you do it in a way that creates continuous results?

And these progressions will help you increase your knockout power, improve your movement efficiency and movement quality, and even build a bit of muscle.

Not to mention the overall athleticism you’ll build with plyometric training.

Alright, let’s get into the plyometric progressions for MMA.

Phase One of Plyometric Training for MMA: 20-16 Weeks Out 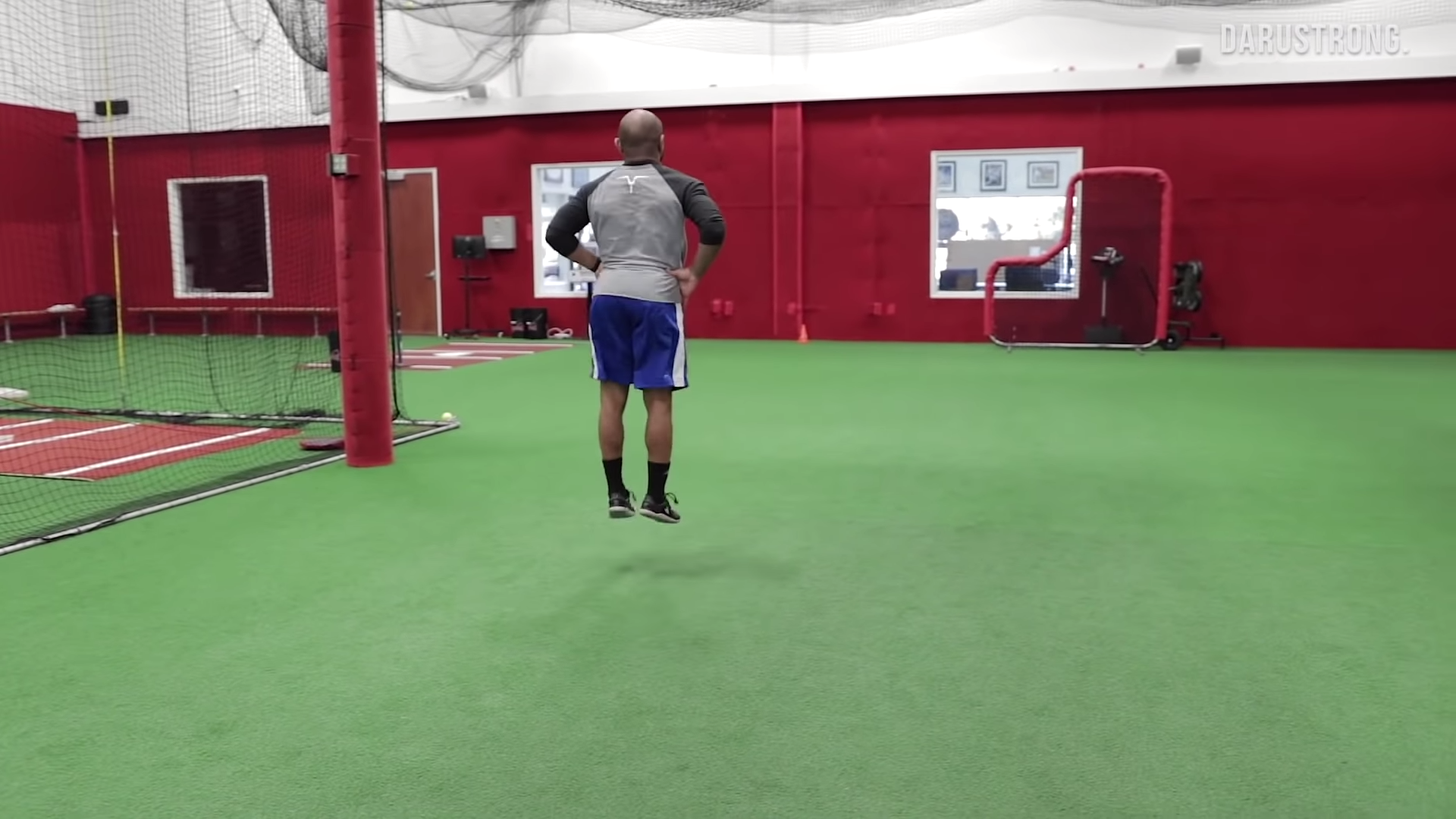 The first phase of plyometric training for MMA performance occurs 20-16 weeks out. This means it’s off camp training, and really there’s no precise timeline for this phase of training because when you’re in the fight game, you don’t always know when you’re going to have a fight.

That means this is phase will consist of the training you’ll be doing year round.

Focal Points of Phase One:

The focus of phase one is very general. We want to work on tissue elasticity and the athlete’s ability to redirect force. Tissue elasticity is your muscle’s ability to stretch to a full range of motion without restriction and quickly return to normal length. As far as force redirection goes, that’s the foundation of plyometrics – the ability to absorb force and rapidly produce force into the ground to propel in whatever direction the athlete desires.

Some of my go-to low level plyometrics are various connected jumps like pogos and squat jumps, power skips, and power bounds.

Intensity and Volume for Phase One:

As I alluded to above, phase one consists of low intensity plyometrics that should be performed three days a week. The volume and intensity will increase as we progress further in the training phases.

Phase One of Plyometric Training for MMA: 14-12 Weeks Out 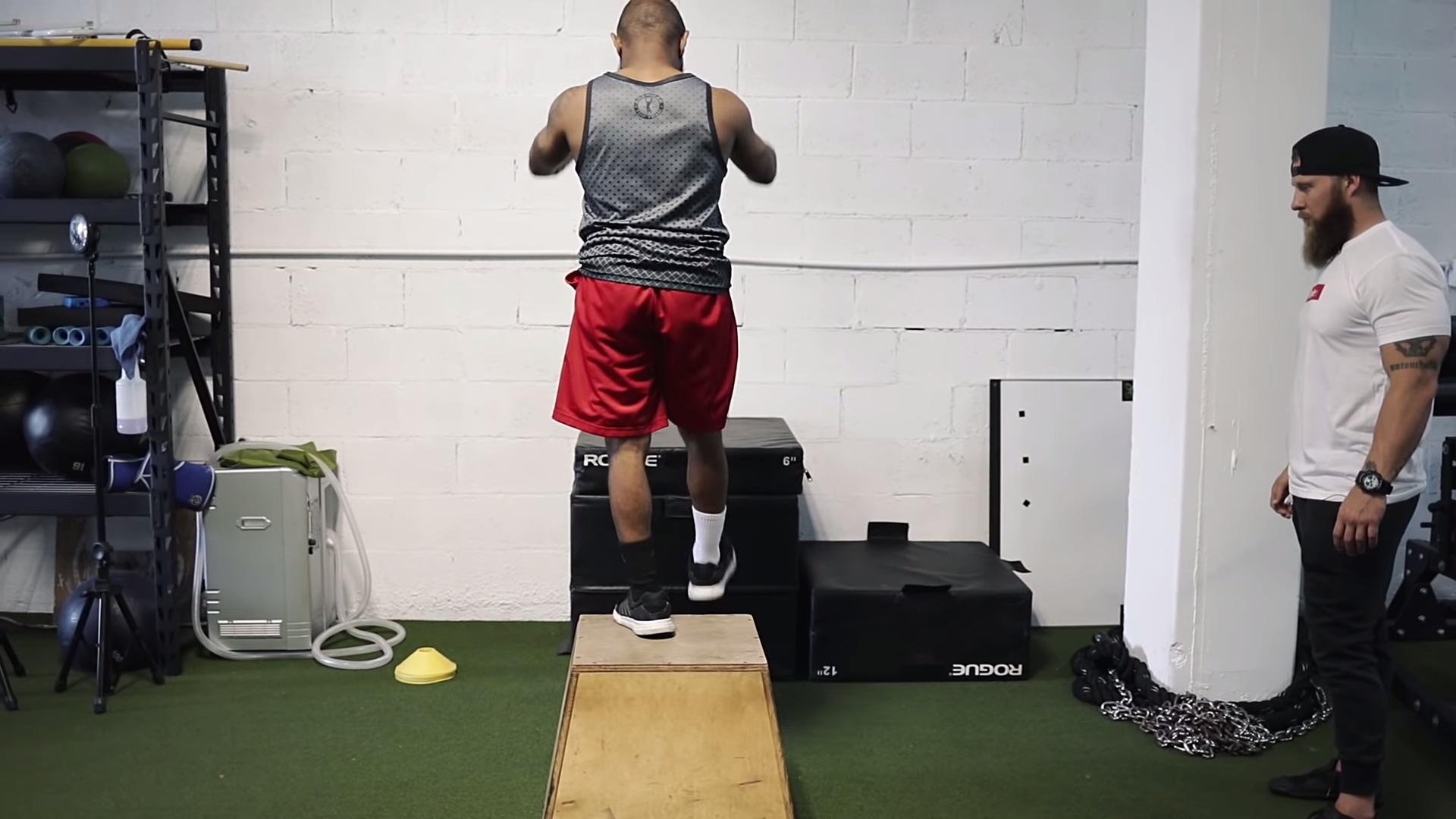 The second phase of plyometric training for MMA performance occurs 14-12 weeks out from your fight. I call this pre-camp, as we’re still getting closer to fight camp, but still have time to develop adaptations that will serve us in camp.

The main focus points of phase two are force absorption and general deceleration. This is the ability to stop yourself efficiently, and more importantly, absorb force without losing force. This has to do with landing mechanics.

I always say, before you can jump, you need to know how to land. This is because your landing mechanics and ability to absorb force ultimately determine how and how much force you can produce. Every time you perform an athletic movement, you’re absorbing high amounts of force then rapidly redirecting that force in a direction that suits your desired movement. If you can’t handle high amounts of force, you will “leak” force and it will be unusable.

We want to maximize the amount of force we can harness and use.

If you think in terms of a squat, many athletes have mini-maxes at the bottom portion of the squat. The barbell moves slower out of the bottom position. In a bench press, the barbell may begin to slow down as you reach lockout. That indicates a mini-max.

To develop force absorption capacity, deceleration, and general landing mechanics, we’re going to use depth jumps. Depth jumps are performed by dropping off of a 12-18 inch box and landing on the balls of the feet with the knees slightly bent and the hips stiff. The hips should not drop when you land in this bottom position, though they should be in a flexed position.

Yielding plyometrics are very low intensity. You should perform them three times a weak, increasing intensity each week.

Phase Three of Plyometric Training for MMA: 8 Weeks Out

The third phase of plyometric progressions for MMA performance occurs 8 weeks out from your fight. That means we’re finally in camp and the focus turns towards power and explosiveness, rather than qualities related to movement efficiency and quality.

The main focus of phase three is concentric action. In general, plyometrics are known as reactive jumps, or placing the muscles on stretch followed by a rapid rebound. In this phase, we’re going to work the “rebound” in isolation. In this case, a more appropriate time is propulsion.

We’re simply working the “up” phase of the movement in isolation to develop force production in isolation.

Modalities to Develop the Focal Points of Phase Three:

As I said above, we’re going to focus on the concentric action of our explosive movements in this phase. So, we’re mainly going to use non-counter movement jumps. That means you’re going to lower into the bottom position of your plyometric movement, hold it for 2-3 seconds, then concentrically jump.

You can also perform non-counter movement jumps by sitting on a box and jumping from that seated position.

Another modality for developing concentric action are medicine ball throws. Ballistic throws such as medicine ball broad tosses, backward tosses, and vertical tosses can be performed by holding the bottom position of the movement for 2-3 seconds to remove the stretch reflex, then concentrically exploding.

Phase Four of Plyometric Training for MMA: 4-5 Weeks Out

We’re inching closer to our fight in this phase of the plyometric progressions. And in this phase, we’re putting everything together. No more compartmentalization. We’re developing our ability to produce high amounts… Fast.

In phase four, we’re focused on reflexive strength, or our ability to put the muscles on stretch and quickly rebound to produce an explosive movement. This means we’re going to reincorporate the counter movement we removed in the last phase.

This time is generally very short, but we want to use different modalities to cut down this time even more.

Modalities to Develop the Focal Points of Phase Four:

We’ll also use reactive jumps. This can be a depth drop to a vertical, broad, or lateral broad. The focus here is, again, to limit the time in between movements. You want to spend as little time on the ground as possible.

You’ll also want to work on change of direction drills like skater jumps, cone hops, and more to reduce your amortization phase when moving laterally. This will carry over to your footwork in the cage.

Intensity and Volume For Phase Four:

These movements should be performed with the highest intensity. This is because the fight is approaching, and you want to squeeze as much power and explosiveness out of your training as possible.

As far as volume goes, you want to perform 10 depth drops in this phase, and a total of 30 jumps per session. This is enough volume to maintain quality without underdelivering in terms of quantity.

Phase Five of Plyometric Training for MMA Performance: 2 Weeks Out

Finally, we’ve arrived at the final phase of plyometric training for MMA. In this phase, we’re throwing everything and the kitchen sink into our training to develop power that translates to your performance in the cage.

There are multiple focus points for phase five. The first focus is power endurance. This is your ability to repeat high intensities throughout the duration of the fight. In other words, it’s your ability to continue to display your power without getting gassed.

The next focus is increased motor unit recruitment. Motor units are responsible for coordinating muscle contractions, and the larger the motor units you recruit, the more powerful and quick your movement will be.

The last focus is sports-specificity. We want to take all the power we’ve developed over the past few months and translate it to sport.

Modalities to Develop the Focal Points of Phase Five:

For example, if you’re a wrestler, you’ll want to use movements that replicate the force vectors of takedowns.

* Detailed, step-by-step breakdowns of my coaching and programming systems

* A full collection of mental, physiological, and physical assessments that will help you get the information you need to deliver dramatic results to your client

* Programming guides to help you feel confident working with anyone

* The most powerful training methods and periodizations, and when and how to use them to have the biggest impact

* Weekly group calls with myself and our community of coaches – ask questions, get inside information on the newest training modalities, and share your success

* Access to hours and hours of lessons and trainings

* and a whole lot more

You’re probably wondering… Will the Daru Strong Mentorship program work for me?

The answer is… Maybe.

What I can confidently say is coaches have totally turned around their coaching success after joining this program.

“coach when I first hopped into the mentorship I was worried because I didn’t kno much about training yet.

I had always worked out all my life and wanted to be a coach.

But bro, the way you put together the mentorship program helped me learn so much. Other trainers are always so fascinated and impressed with my training knowledge.

I’m now working with 3 Bellator fighters, and have constant clients wanting to work with me from word of mouth at the gym. Coach I can’t thank you enough and I’d love to come down and meet you in person as well.

Either way coach. Keep crushing it!!!”

Sam messaged the Mentorship group chat a few days ago, celebrating the success of his client who just won nationals in heavyweight freestyle wrestling.

He used the methods inside of the Mentorship program to help his athlete rehab her back and knee, increase her performance, and win nationals… All in the same year.

Nick went from never coaching athletes before, only coaching general population, to attracting a horde of high school, college, and even professional athletes to him. Now, he’s looking at getting his own training facility.

These results are possible, but not typical.

But if you think you have the work ethic to make results like these happen for yourself, go here>>>

Post Views: 692
PrevPrevious3 Exercises to Prevent Getting Knocked Out In a Fight
NextFull Guide to Endurance Training for MMA and BoxingNext