Increase Your Knockout Power With These 6 Medicine Ball Exercises 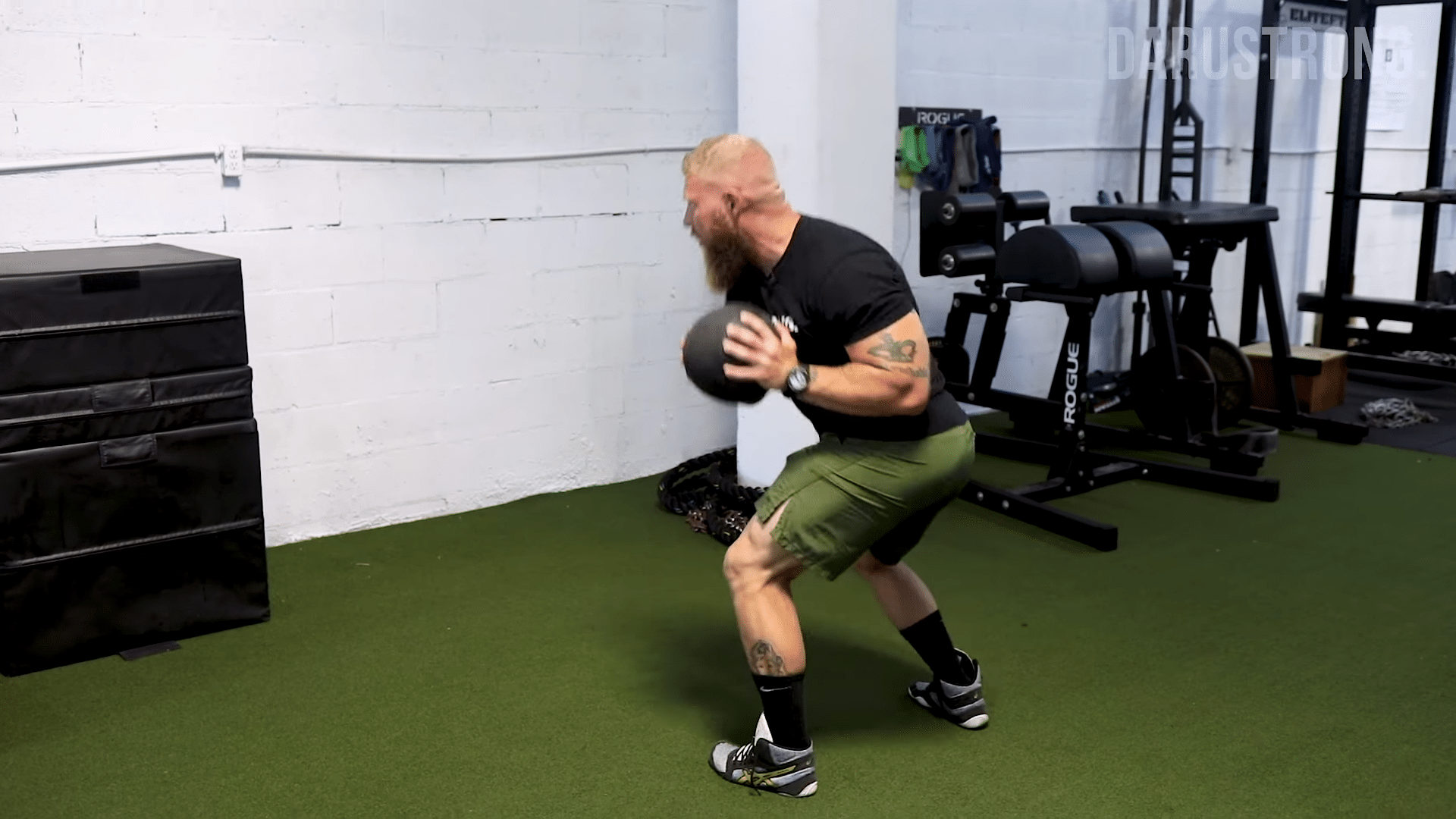 Increase Your Knockout Power With These 6 Medicine Ball Exercises

When it comes to increasing knockout power for boxing and MMA, I’m a big fan of using tools that are cheap and accessible for all fighters. My go-to’s are kettlebells, plyometrics, and of course, ballistics, which only require a medicine ball.

Today, I want to focus on how to increase your knockout power with a medicine ball.

Ballistic training is training in which an athlete throws a weight in order to improve power, and they differ from plyometrics in that they are more concentric-focused than plyometrics. That means they are focused on pure force production.

This said, in this post, I want to go over 6 medicine ball exercises to increase your knockout power. Each one of these will improve your punch, press, rotational, or slamming ability.

In other words, these 6 medicine exercises have multiple carry overs to your boxing and MMA game, especially to your knockout power.

Before I jump in, if pure knockout power is your goal, I invite you to take Heavy Hitter for a ride. Heavy Hitter contains my system for increasing knockout power through strength and conditioning. It’s been used by fighters of all levels around the world, and now I want to give you the opportunity to try it for half-off.

This first medicine ball exercise works a punching/pushing pattern. This movement mimics a shot put throw from track and field and develops your ability to transfer force from the ground up while rotating through to generate power.

This movement works the oblique sling, which is responsible for rotational power. This has obvious carry over to knockout power, and your hands for boxing and MMA in general.

How to Perform the Shot Put Throw:

This medicine ball exercise is another movement that uses a punch/push pattern, though this movement is going to be more specific to a punch. The straight arm medicine ball has you square to the wall, loading the medicine ball up by bringing one elbow towards that same hip, and generating power with the lower body to propel that medicine ball towards the wall.

Just like the last movement, this has clear carryover to your jab and your cross. It will also help to build the rotational power that’s so critical for combat sports.

How to Perform the Straight Arm Throw: 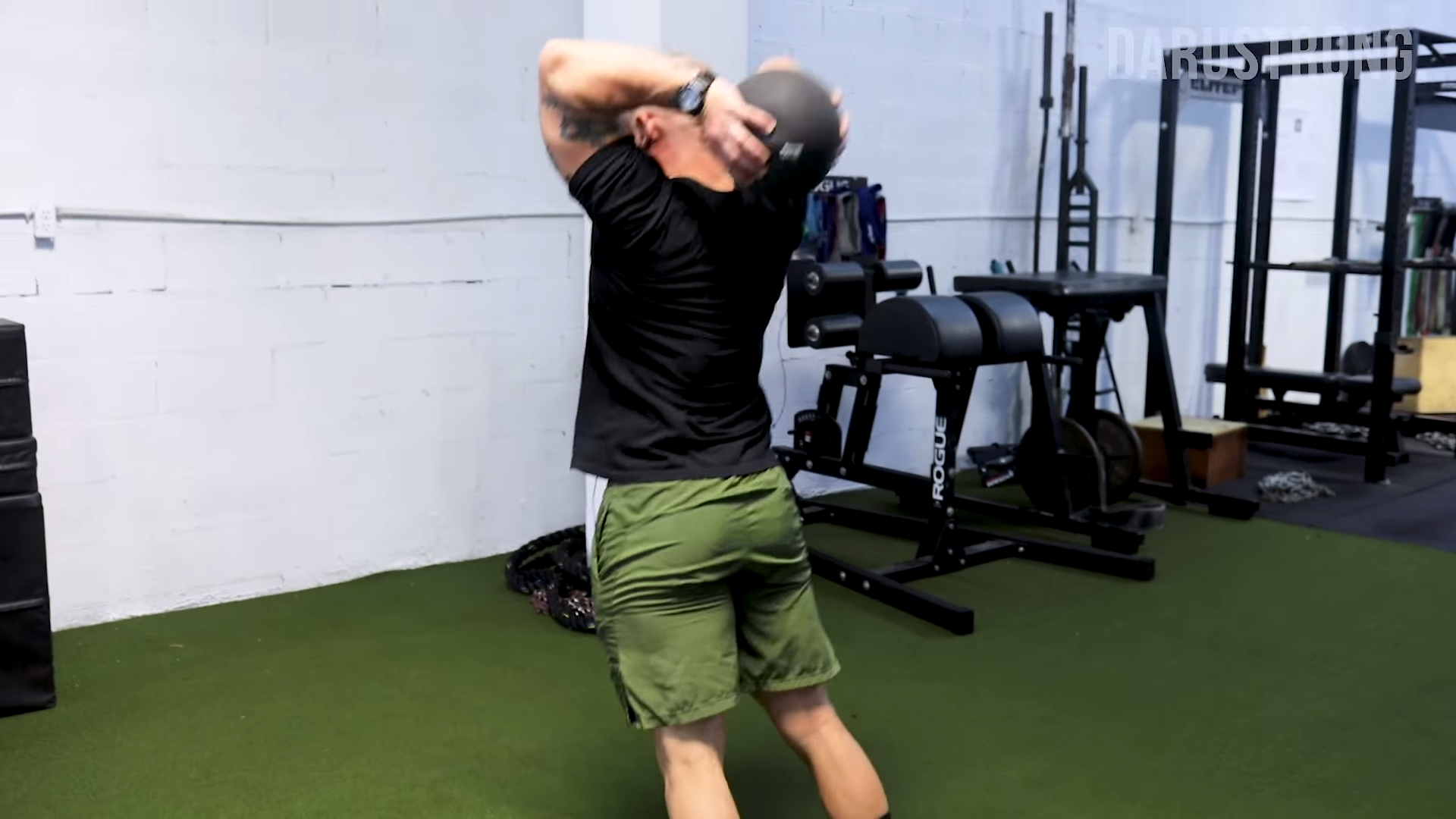 This medicine ball movement uses a slam variation, except instead of doing a traditional medicine ball slam, you’re going to throw the ball overhead towards a wall. It almost mimics an inbound pass for soccer. This is going to build explosiveness in the triceps, lats, and even the core.

How to Perform the Overhead Throw: 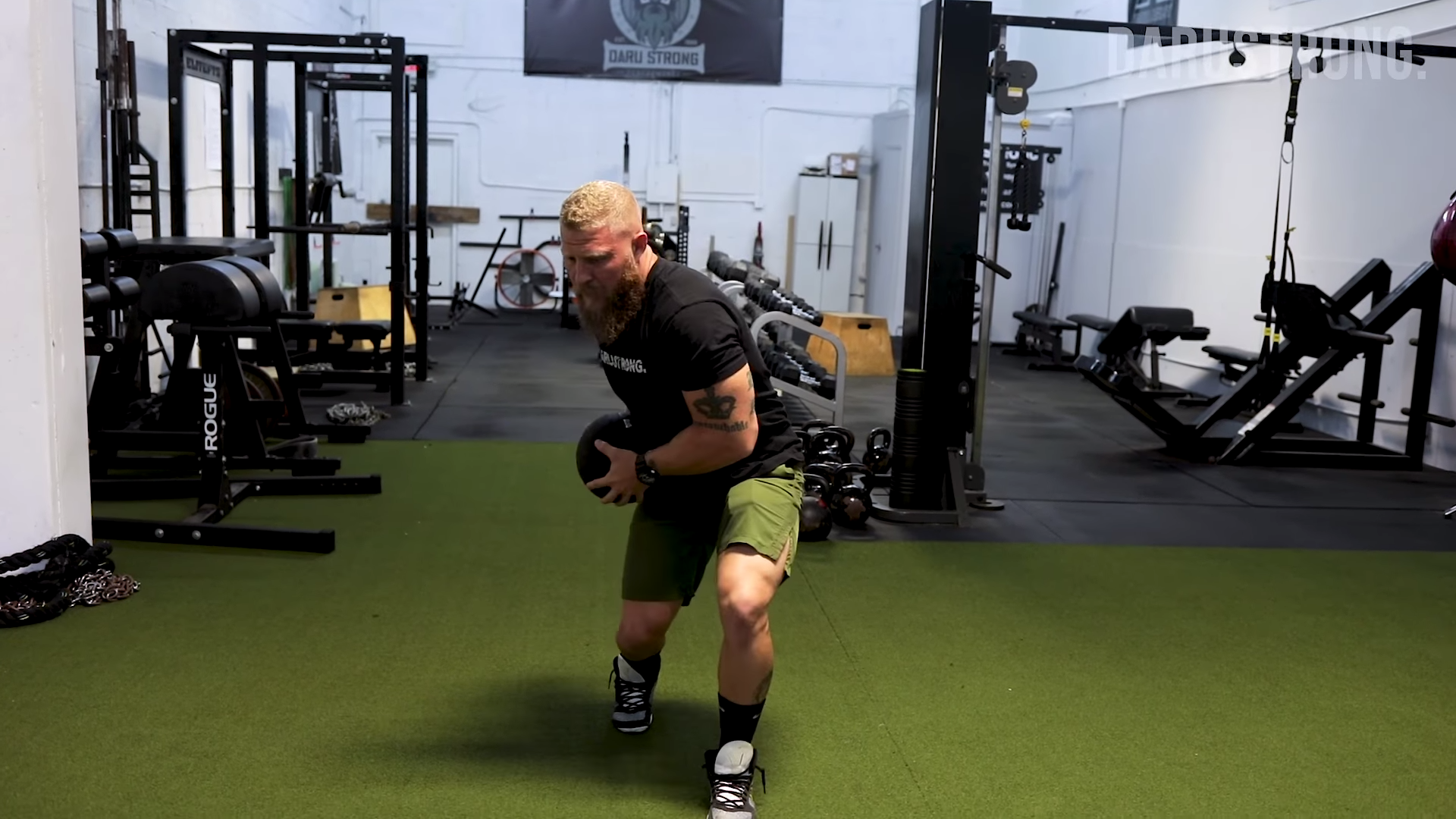 Here’s another medicine ball exercise that uses a slam pattern. The rotational slam builds your rotational ability while throwing in elements of balance and stability due to the legs being split apart. And although you have less stability in this position, the control you have over the dynamic movement is increased due to your positioning.

How to Perform Rotational Slams: 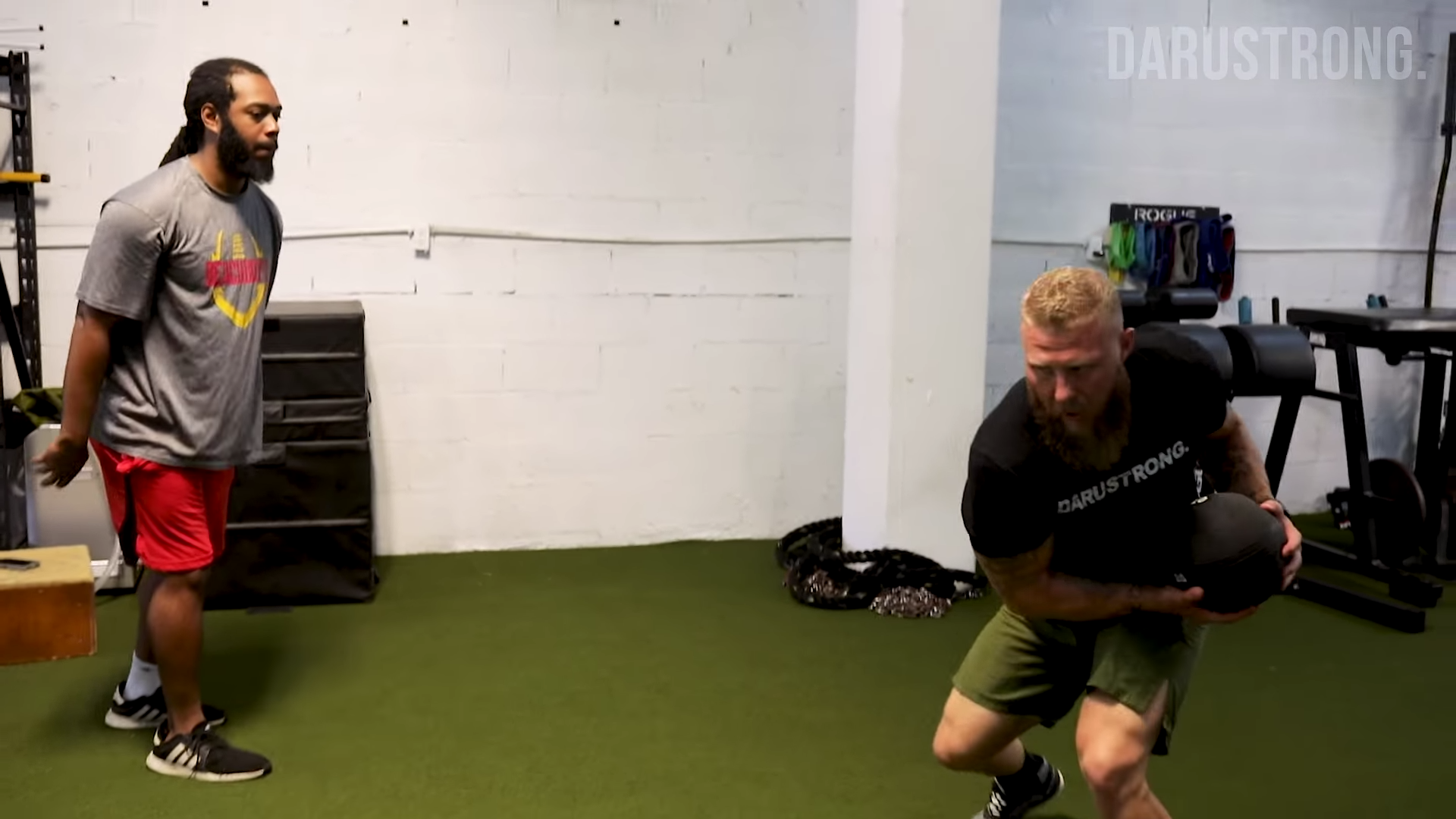 The wall slam requires a partner throwing the medicine ball towards you so you can redirect the force of the ball and throw it towards a wall. This movement heavily relies on your ability to absorb and redirect force. As such, it will go a long way in building your reactive strength as well as rotational power. These are two traits that are absolutely essential for boxing and MMA, especially if increased knockout power is your goal.

How to Perform The Wall Slam: 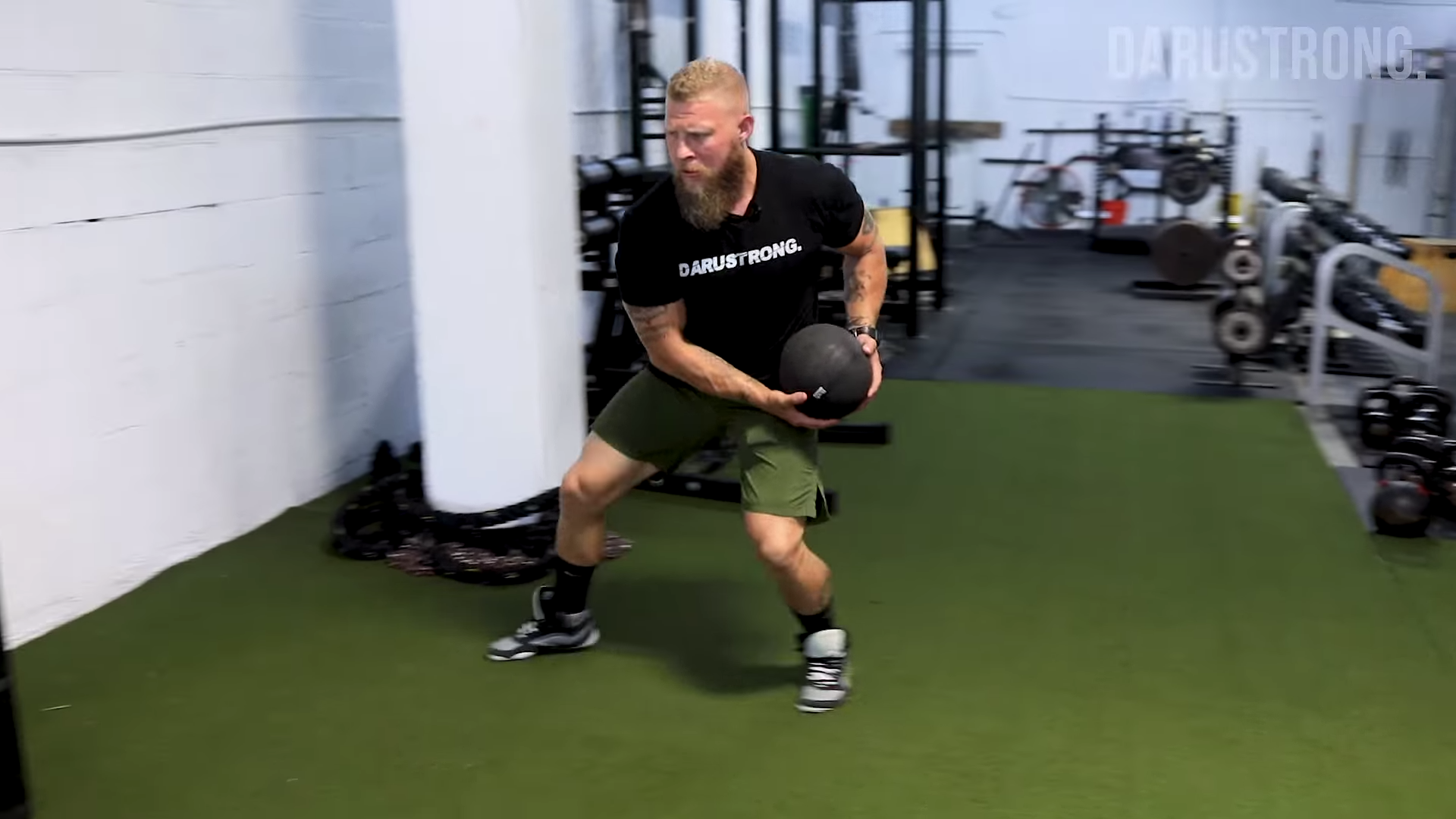 This movement adds a dynamic component to the last movement. The dynamic component is a back step that moves you closer to the wall. This back step will generate forward momentum that will result in you throwing the medicine ball towards the wall with much more power. The caveat is that if you want to execute this movement perfectly, it will require a tremendous amount of balance and coordination.

This is another movement that will build your rotational power, a quality that will carry over to your knockout power.

How to Perform The Dynamic Wall Slam:

When it comes to the weight and reps for medicine ball ballistic training, less is more. As far as the weight goes, you want the weight to be light enough to move the medicine ball with velocity, but you also want it to be heavy enough to require force production.

In general, I like to use between 10-12 pounds for males and 6-8 pounds for females. In my experience, this is these are the sweet spots that allows the athlete to move fast without sacrificing force production.

I keep the same mindset when it comes to reps and sets for medicine ball exercises – less is more. In general I program no more than 3-5 sets of 3-5 reps for each movement. This way, every rep can be performed with the highest quality.

If pure knockout power is your goal, I encourage you to check out Heavy Hitter.

It contains my complete strength and conditioning system for those who want to focus on pure knockout power.

Right now, it’s available for half-off to blog readers AND it comes with a 60 Day Money Back Guarantee, which means if you don’t improve after following the program for 60 days, just shoot me a message and I’ll refund your money.

This way there’s no risk. It’s just a test-drive or a trial run.

Increase Your Knockout Power And Claim Your Exclusive Discount Here>>>