5 Ways to Increase Your Punching Power At Home 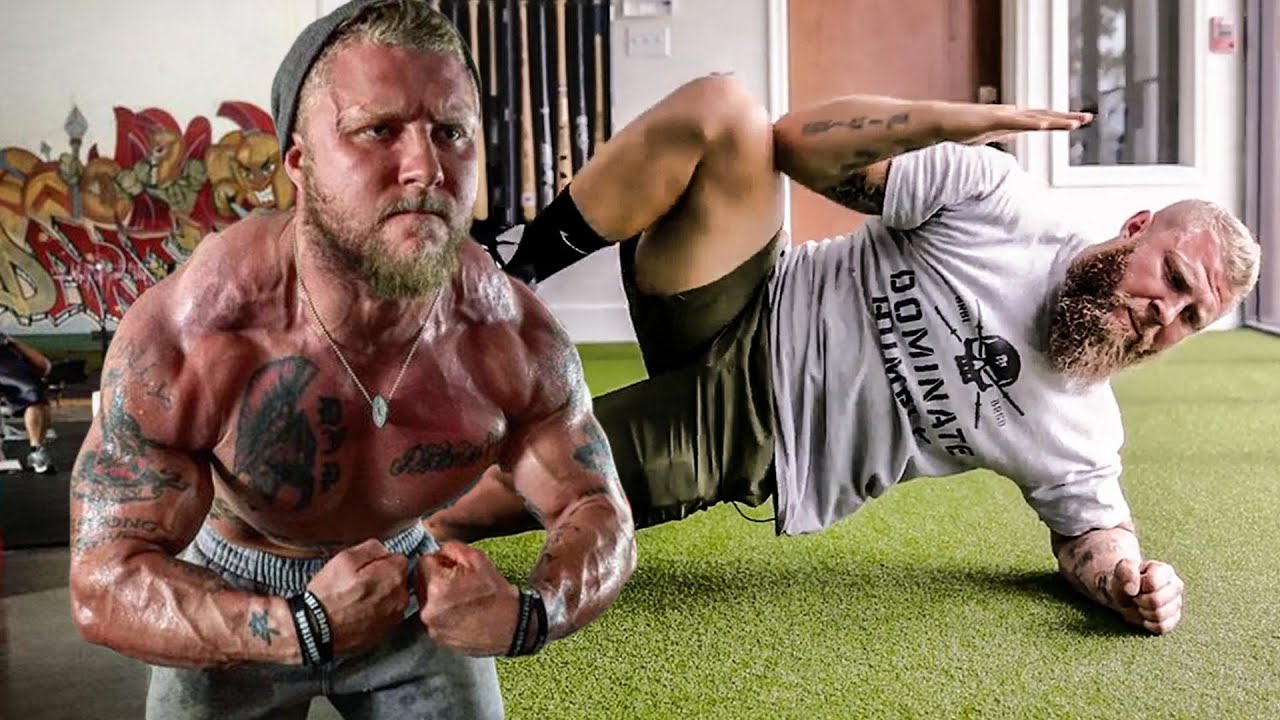 5 Ways to Increase Your Punching Power At Home

Serious athletes should always be finding ways to perfect their craft, no matter what tools they have at their disposal.

I remember back when all sports were cancelled, I saw a post of an MLB player who set up a batting cage in his apartment. Yes… In his apartment. You could see the skyline through his windows.

Many other athletes made similar adjustments. And that’s because they know they need to continually progress. If you’re not progressing, you’re getting worse.

On this note, today I want to share 5 ways to increase your punching power at home, little to no equipment required. So whether you have a gym membership or not, it doesn’t matter. You don’t have any excuses after reading this post.

The first, and most simple, way to increase your punching power at home is to do something everyone who’s serious about combat sports should be doing – training their core. The core is the bridge for your punching power. Every time you load up to throw a knockout punch, toss out a jab, or throw a devastating overhand, high amounts of force are being transferred through the core.

Your ability to keep your core stable determines how much force you maintain, and ultimately, how powerful your punches will be.

There are five components of core training that you should account for if you want to increase your punching power at home. Let’s go into them:

And because the core consists of a variety of muscles (like the transverse abdominis, obliques, and erectors), we need to perform isometric core exercises that target all of these areas. Luckily, this isn’t rocket science. Begin with simple movements like planks, prone cobras, and side planks. Once you get good at those, begin to progress them by decreasing the stability you have in those positions, adding some movement, or adding some other variation.

Every time you throw a punch, or even a kick, you’re generating force using torque. Part of this torque is produced through the rotation of the core, specifically the oblique muscles. That’s where rotational core exercises and ballistics come in. Movements like Russian twists, barbell windshield wipers, medicine ball side tosses, medicine ball throws, and more can develop the rotational ability of the core.

Flexion of the core occurs when the sternum increases in proximity to the hips. The muscles responsible for core flexion, like the rectus abdominis and obliques, also play key roles in throwing powerful punches. That said, we’ll want to build up these muscles to ensure we build a sturdy core that supports powerful punches.

Some of my favorite trunk flexion exercises include sprinter sit-ups, v-ups, and Heisman’s.

Extension occurs when the muscles of the posterior chain (back side of your body) contract. The main muscles responsible for trunk extension are the erectors, as well as the glutes. These muscles are important for punching power because they allow you to maintain good posture as well as play a role in helping you achieve hip extension.

Some of my favorite movements for trunk extension are prone cobras and bird dogs.

Trying to throw powerful punches with poor punching technique is like trying to shoot a cannon out of a canoe. That’s why the FIRST thing you should address before you try any other method to increase your punching power is develop rock-solid technique that’s second-nature to you.

When I say technique, I’m not only referring to your punching technique, but also your footwork. Your footwork plays a key role in your positioning. And good positioning is what gives you the opportunity to throw powerful punches.

If you don’t know how to shadow box with technique in mind, check out this video I made with my associate, Maureen Shea. She’s a two time world champion boxer, and her technique, footwork, and positioning is tighter than most boxers out there.

Either way, setting some time aside for some technique-focused, intentful shadow boxing is a great way to increase your punching power at home. 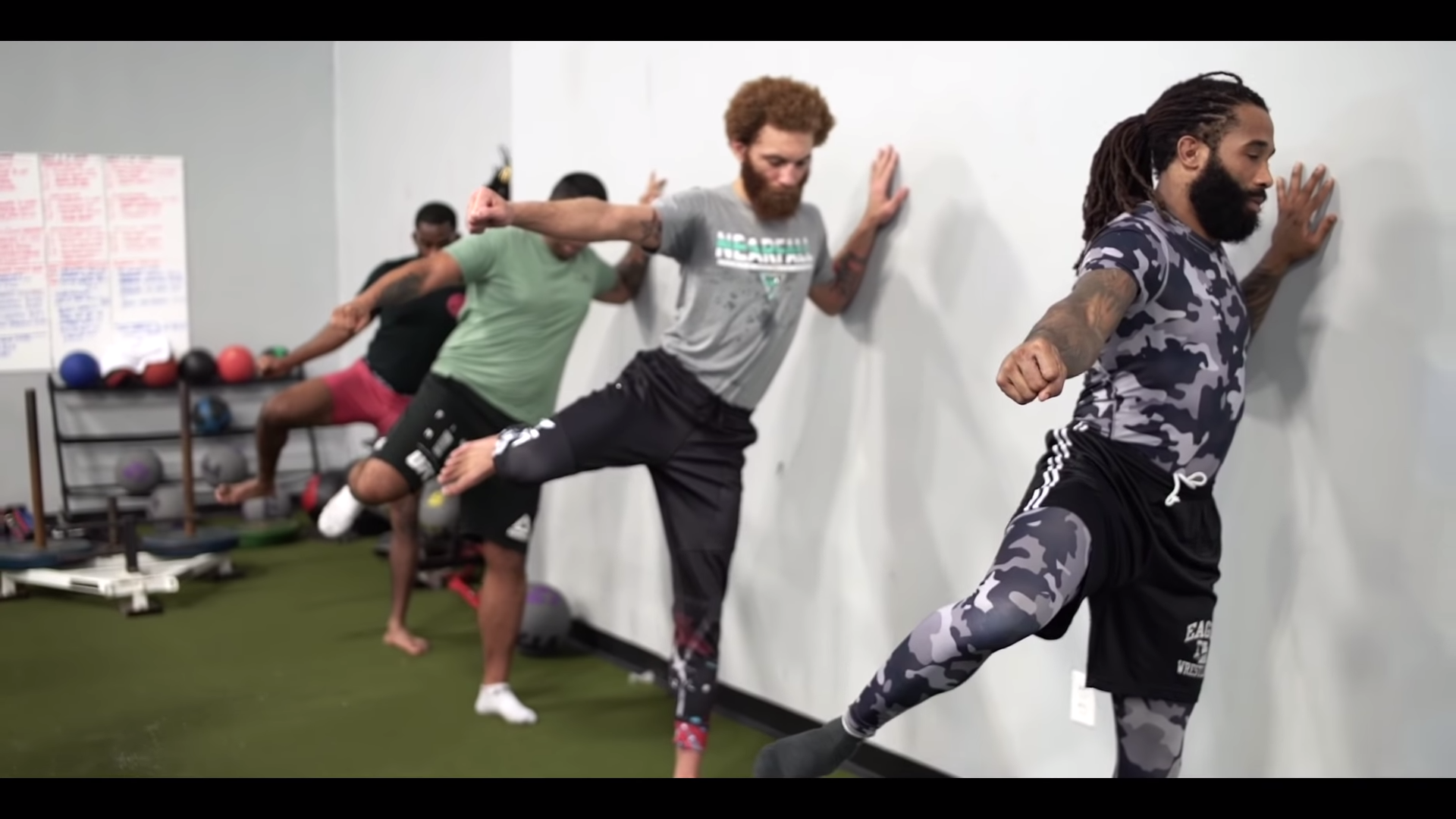 These muscle imbalances occur due to pattern overload. Pattern overload is caused by performing repeated movements over and over. And there’s no sport that requires this more than MMA or boxing. Constantly punching, throwing kicks, staying in that fight stance – all of that contributes to muscle imbalances in the shoulders, hips and more.

If you want to unlock your true power potential, you have to attack these imbalances to unlock healthy ranges of motion.

The common problem areas occur in the pectorials, anterior deltoids, hip flexors, and neck. These areas should be stretched regularly to reduce the tension in these areas.

The last step in this equation is activation.

Muscle imbalances cause some muscles to be tonic and overactive. These are the muscles we stretched in step one. Other muscles need to be activated, as they’ve had their function interrupted by the overactive muscles.

Below, I’m going to share a handful of my favorite mobility and activation movements for fighters you can use to increase your punching power at home: 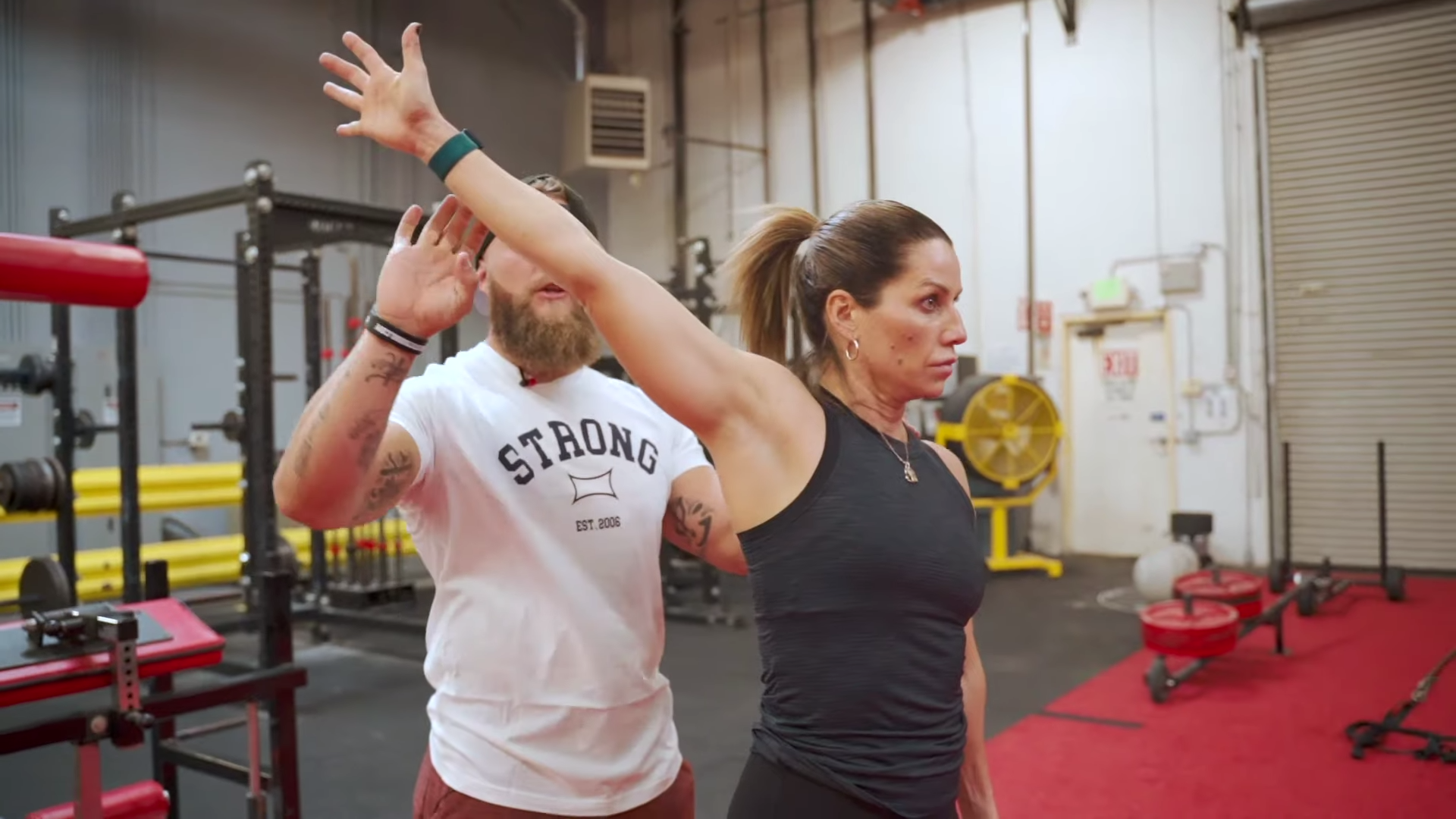 Controlled articular rotations (CARs) are some of my favorite movements to unlock new ranges of motion while increasing control in those new ranges of motion. You can perform CARs for any joint, but I usually attack the hips and shoulders with CARs, as they’re the typical problem areas.

Here’s How to Perform Shoulder CARs: 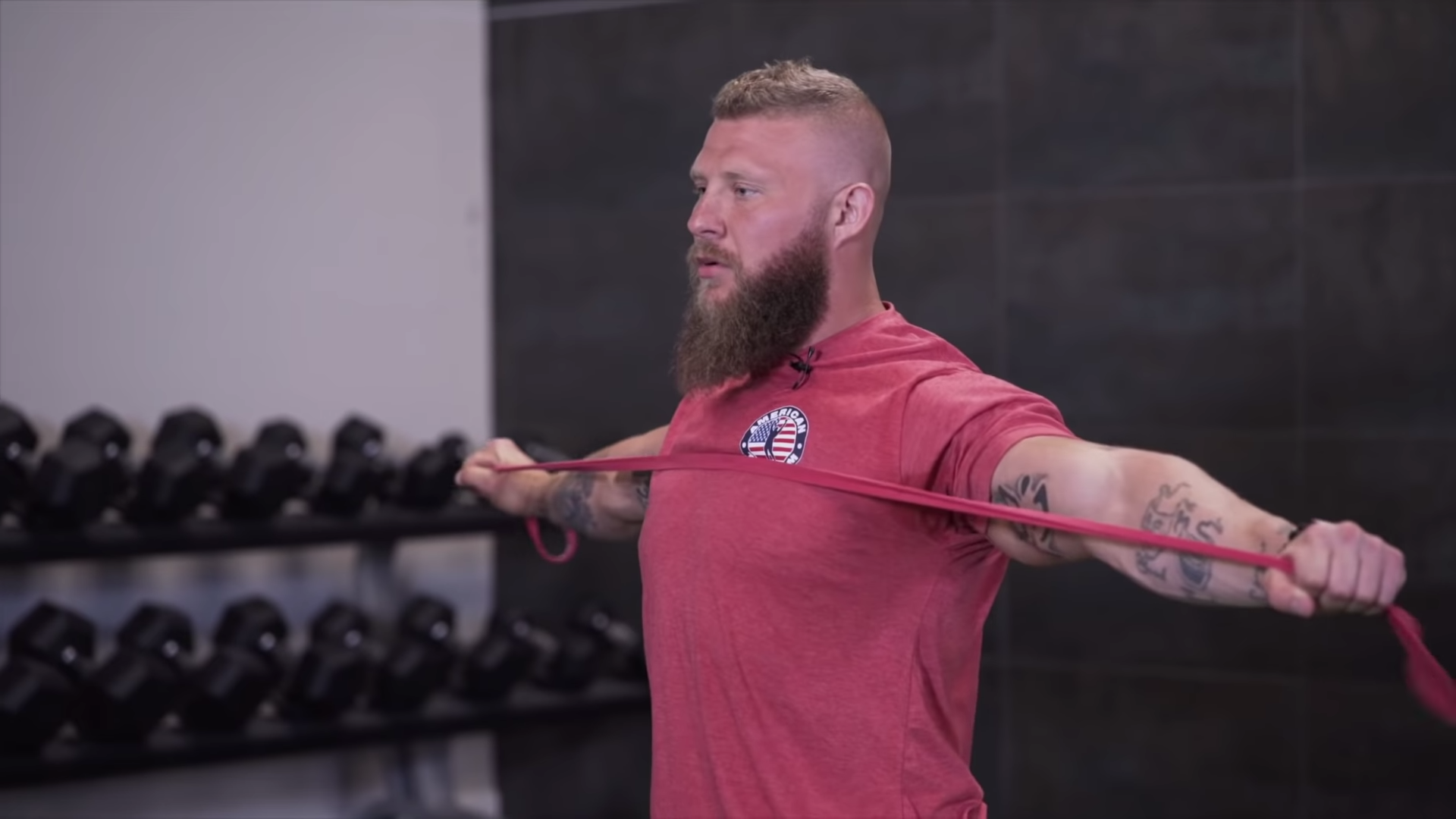 You can perform band pull aparts with a pronated or supinated grip. You can also add shoulder protraction at end portion of the movement to make it more advanced.

Weighted prone swimmers serve as a quasi-mobility and activation exercise. While they do unlock new ranges of motion in the shoulder AND increase the athlete’s control in those positions, the movement also activates and builds the muscles of the upper back. It’s an absolute must for any fighter serious about their performance.

Here’s How to Perform Prone Swimmers: 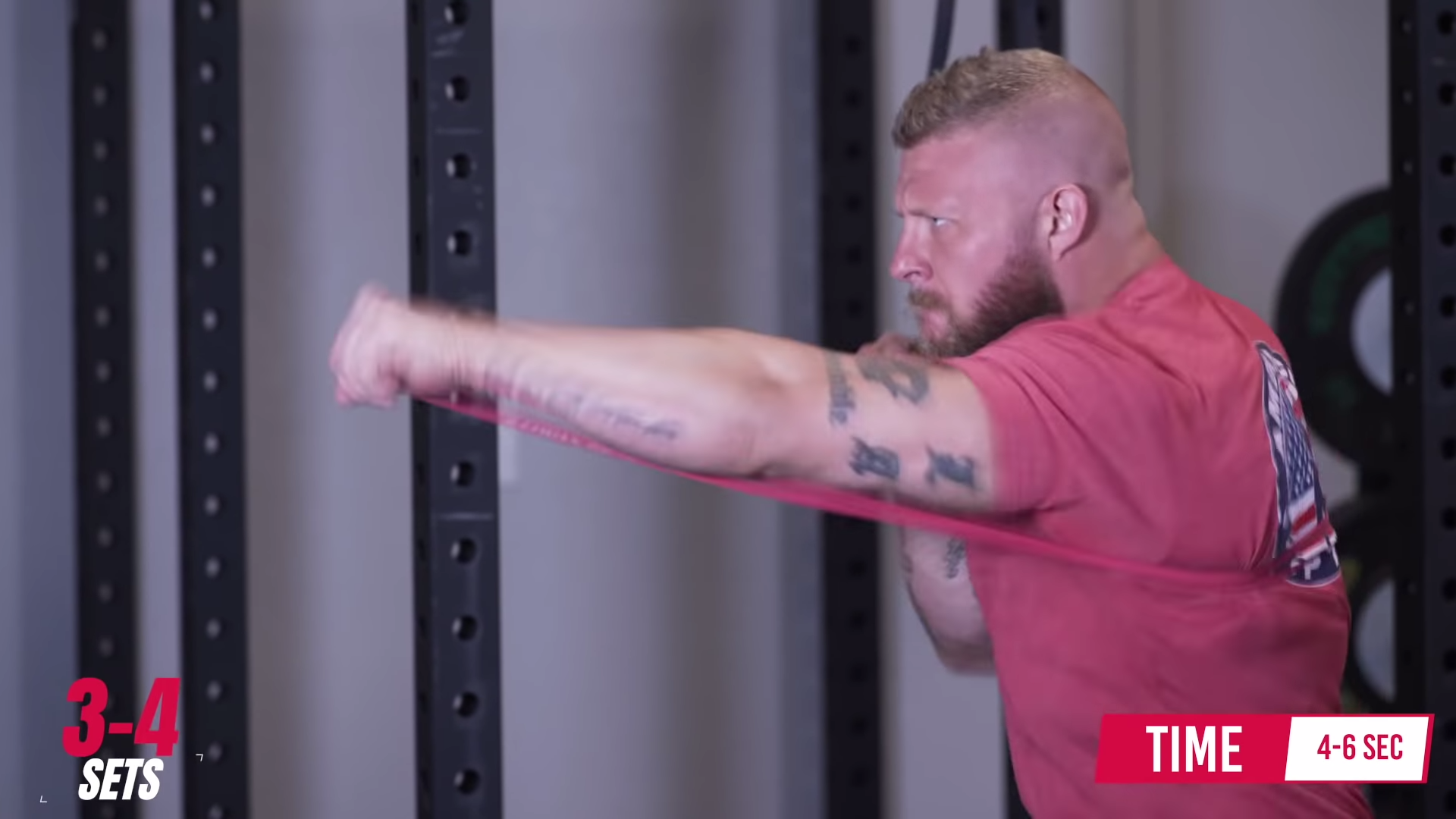 This can also help your technique, as you’ll learn to fully lockout your punches.

Resistance bands can also be used to increase mobility, build the muscles of the upper back, and hammer away at imbalances in general.

If you’re serious about fighting, get your hands on a set of quality resistance bands. 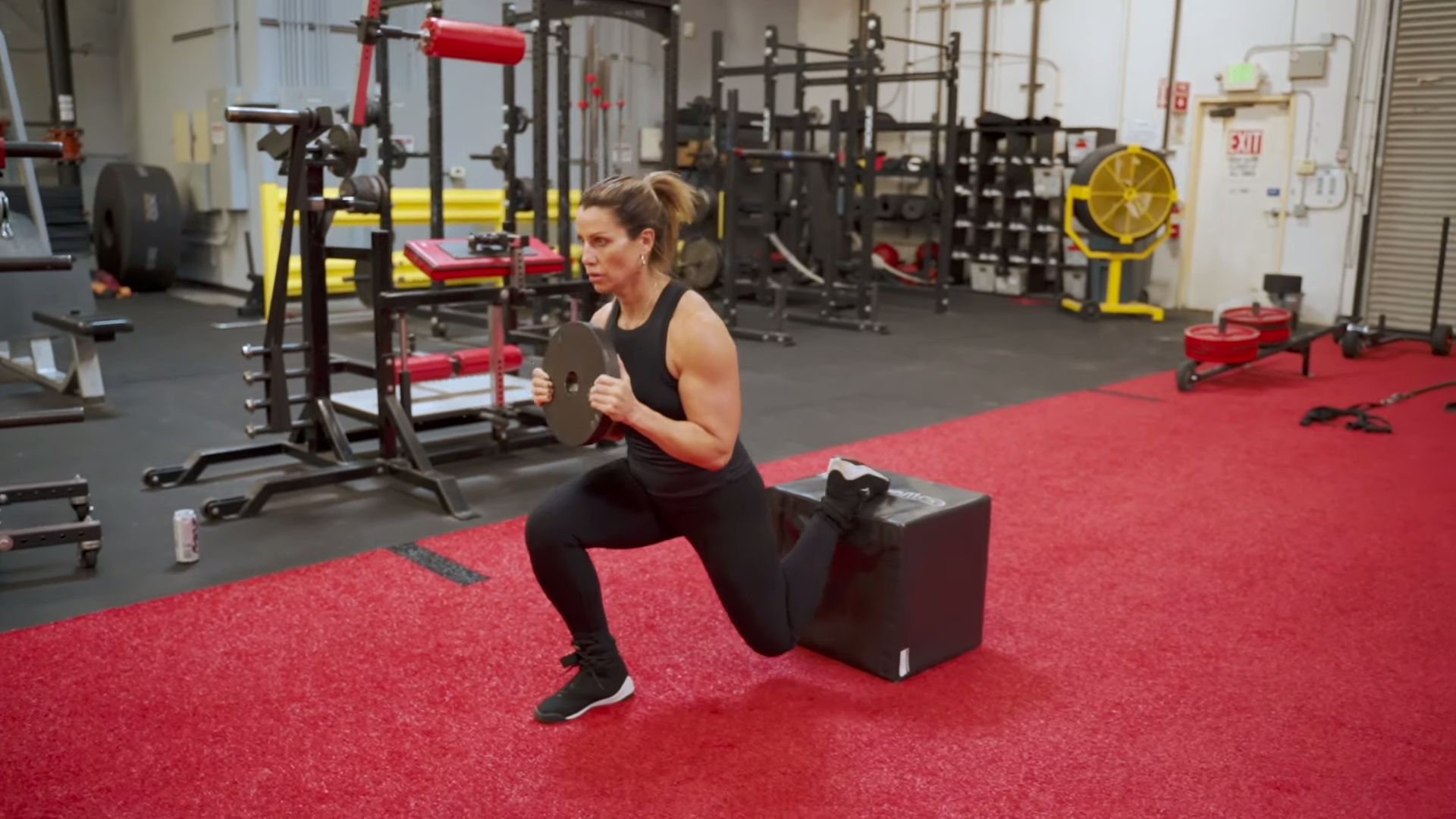 And that’s the key here.

Relative strength is the main difference between bulky powerlifters and athlete who still lift a ton of weight, but can also leap 35+ inches off the ground, throw knockout punches, explode for a sub 4.4 40-yard dash… I think you get the idea.

In less words… Relative strength can be the bridge to more power and explosiveness.

And building relative strength is a good way to increase your punching power at home.

Relative strength can increase your stability, balance, movement quality, and play a role in preventing injury.

Below, I want to share three lower body exercises that can increase your relative strength. Plus, I’m going to share how you can manipulate them to see more carryover to your punching power.

The rear foot elevated split squat is one of my favorite movements to use in the gym, whether it’s weighted or bodyweight. The reason is, this movement packs a punch, and brings a storm of benefits to the user. Rear foot elevated split squats can bring qualities like strength, balance, stability, and even power. Plus, they’re a unilateral movement… Which means they can hammer away at left to right muscle imbalances.

Here’s How to Perform the Rear Foot Elevated Split Squat:

Box step ups are another unilateral exercise you can use to increase your punching power at home. I like box step ups for bodyweight training because they can be manipulated in a variety of ways to bring different benefits to the user. If you want to increase strength and size, perform them with a controlled concentric and slow eccentric portion. If you want power, perform them rapidly and explosively.

You can also vary the shin angle of the working leg to have different carryover to your sport. For example, if you’re a fighter, you can perform box step ups with a more aggressive shin angle to have more carryover to a takedown. If you were a basketball player, you could stack the knee over the ankle to work on your vertical.

Copenhagens work on lateral sling strength and stability, a commonly overlooked quality by almost ALL athletes. The lateral sling helps you control lateral movement and the sling itself consists of the gluteus medius, gluteus minimus, the TFL, and IT band.

Essentially, the lateral sling consists of the muscles that take you from being off center, back into neutral.

And the lateral sling plays a role whether you’re fighting, running, and even when you’re walking.

Here’s How to Perform Copenhagens With a Hip Bridge:

Alright, so how do you manipulate normal, boring old bodyweight exercises to increase your explosiveness at home?

There’s a barrage of different ways. One way is to use tempos.

For example, eccentric tempos can be used to improve your capacity to absorb force. If you don’t know, every time you go to throw a punch, go for a takedown, or throw a kick, you absorb force from the ground. The more force you can absorb, the more force you can produce. So it makes sense that a fighter would want to improve his force absorption, as it would inrcease his punching power.

Another example, isometric tempos can increase motor unit recruitment. If you don’t know, whenever you perform any movement, you recruit motor units. But chances are, you’re not recruiting the largest, fast-twitch motor units every time you move.

And this is exactly what I do in Body Armor.

I use tempo bodyweight movements, along with other modalities I use with my world-class fighters, to elicit power, strength, stability, and size gains with JUST bodyweight training.

And this approach has routinely created INCREDIBLE results.

For example, check out Edgar. 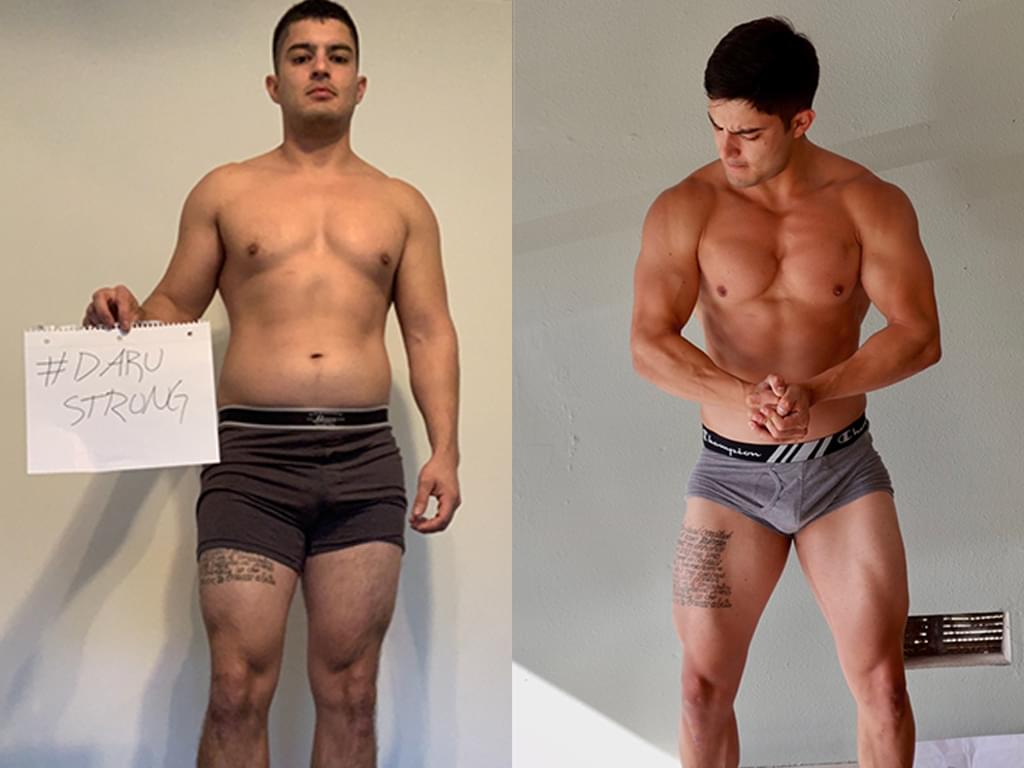 Before Body Armor, Edgar had muscle. But it was covered by a layer of fat.

After just 90 days with Body Armor, all of that fat melted off Edgar, and now he walks tall looking like a Hollywood Celebrity who can perform like a world class fighter.

This is just one drop in a sea of examples of what kind of results Body Armor can create.

If you’re interested in transforming with Body Armor, check out this link. It’s a special, blog-only link for half-off of Body Armor.